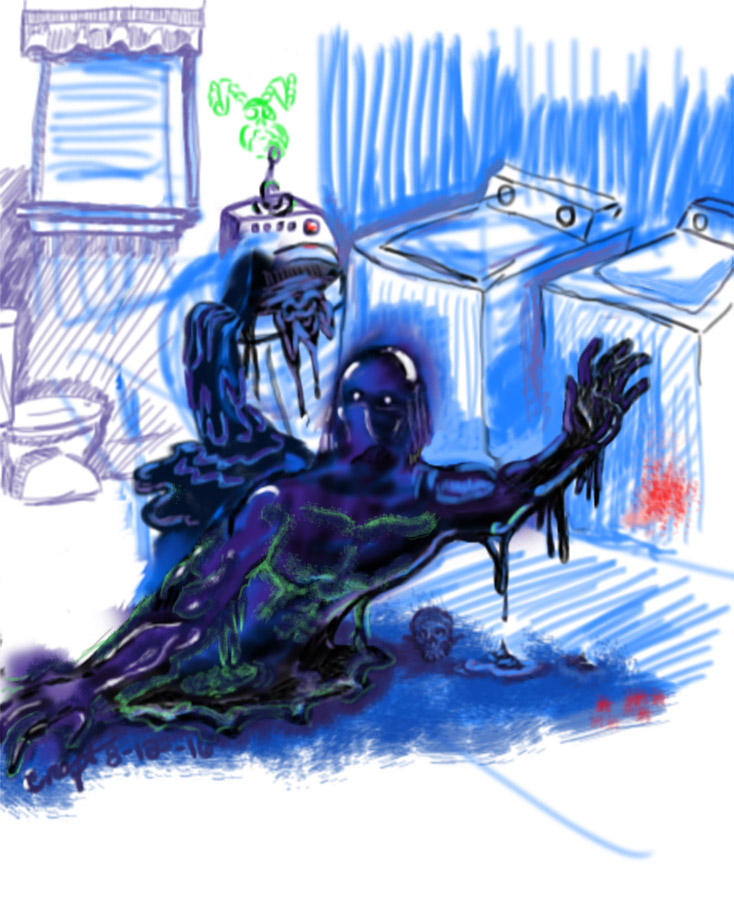 “Maybe I can contain it,” June said to herself, “The police will never believe me.”

The portal generator wasn’t through transporting and its small size meant it wasn’t built for something so massive. The creature in June’s utility room slowly crept toward her. It would never be satisfied with a single meal and viewed June as fair game.

June remembered she kept a gun in her hall closet. How long did she have? The thing wasn’t giving chase so far. June found the box and opened it. The gun was missing.

The portal generator kept processing. The creature’s body flowed through like black honey with various luminescent colors here and there. Perhaps it was a mistake to go this way? The creature was stuck where it was until all of it was through the portal. It turned around and examined the machine. Oh, fairly simple; you just press here to speed it up.

June searched in her room for the gun. It was on her night stand but unloaded. She just liked the security while alone in the house. Now with loaded gun in hand, she ran to the utility room.

The creature was about through the portal. The portal generator was now moving faster. Just a little more.

June saw the creature concentrating on the portal generator.

Two shots were fired and hit the creature in the head and chest. They passed harmlessly through it and into the wall. The creature ignored her, it was so fixed on getting fully out. What if she destroyed the portal generator? Whartleburg would not be able to come home.

The portal generator blew apart and immediately stopped its work. The remainder of the creature would stay on the other side forever. It was like a faucet was turned off. June had the creature’s full attention.  That faceless head slowly turned toward her.

The lights in the hallway flickered and went out. Then the lights in the utility room started to flicker. In the renewed darkness could be seen two points of faint white light from deep within the creature’s face.

June stared at the creature and immediately regretted having destroyed the one thing it that might have saved her life. She could still see the remains of the portal generator spew sparks.

June saw the thing move this way and that to evade any sparks. Sparks. She had an idea and ran for the pantry in the kitchen.

Excerpt from “Enzectozoid Chronicles: The Legacy of Whartleburg the Whalloper” from the curiously long book of short stories, I am lettuce, who are you?

To the next page